UN must save the islands!

Following the success of the 2015 Climate Summit in Paris, there is hope for many small islands threatened by the rising oceans! However, in many cases it may be too late, and something must be urgently done to save them!


Here is a view of Achutupu, a tiny island off the Caribbean coast of Panama, painted by Howard Walker.

This proposed rescue concept would involve constructing a raised platform for supporting a recreated landscape, over an island that is being engulfed by the sea, using the mushroom structural elements of the Honeycomb Villages to build a concrete deck on piers. Gradually, the endangered village would be relocated on this elevated ground. The deck would be covered with soil and the existing buildings and huts moved on top. The entire man-made raised island may grow like a plant on an horizontal plane, as needed. As the sea advances, more hexagonal modules could be added. The structure could be prefabricated on the main land and tugged to the island on rafts. Stairs and circular ramps would provided communication between the new higher ground and the flooded lower land and sea, without being affected by the changing ties or storms. The concrete structure should be clad with multi-colored artificial stone to simulate corals and blend into the natural landscape. 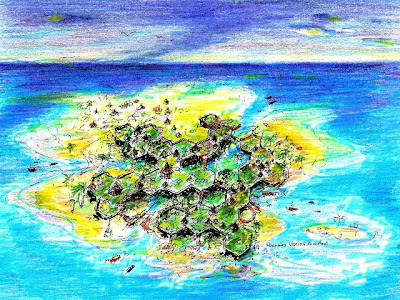 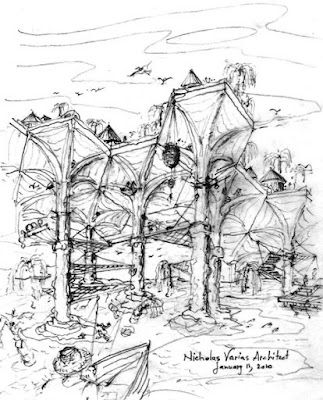 Maintaining the presence of the native village on an island would be preferable to a forced resettlement which might result in a loss of identity. Cost-wise, if all aspects are considered, staying on the ancestral place may prove to be preferable. It would also be a matter of principle not to retreat. Although the required infrastructure will be expensive, so will be any relocation. Another positive outcome will be the creation of many long-term jobs on the islands, and on the main land as well, especially in the construction and service sectors.